Nose shapes are very different, and in fact, there is no one standard optimal shape. The nose shape is a result of genetics, gender, ancestry, and potentially physical trauma. For most people, a big nose signifies unattractiveness, which is why procedures to reduce nose size are popular.

A nose is large if it exceeds the average vertical length of 2.2 inches for men and 2.0 inches for women. Other ways to measure if your nose is big include the nasolabial angle, nasal index, nasal height, and looking at facial harmony.

We have to consider that nose shape should harmonize with the rest of the face regardless of whether the nose is big or small. As we get older, it’s a natural process for our nose to elongate and get a drooping tip. This change is due to facial resorption, wherein the bones start deteriorating, which affects the whole structure of the face (Mendelson et al. 2012).

For an overview of important nose aesthetics principles, check out this Looks Theory episode:

Key Indicators of Having a Big Nose

The male nose is typically larger than the female nose by 10%. This difference is demonstrated by a study with 18 female and 20 male participants, aged 3-20. There is an increase in the nasal height in males, and their nose has less integration with the facial skeleton (Holton et al. 2016).

Another way to see if the nose is bigger than normal is by checking the rule of thirds. This means there should be three equal divisions to your face. The forehead, the length of the eyebrows to the nose, and the length of the lips down to the chin should each occupy roughly a third of the face.

When it comes to the nasal width, it should roughly be as wide as the intercanthal width. For the ideal nose width, it should be about 1/5 of the facial width. Draw an imaginary line from the inside of the eye going down; your nose width should fit between the lines. 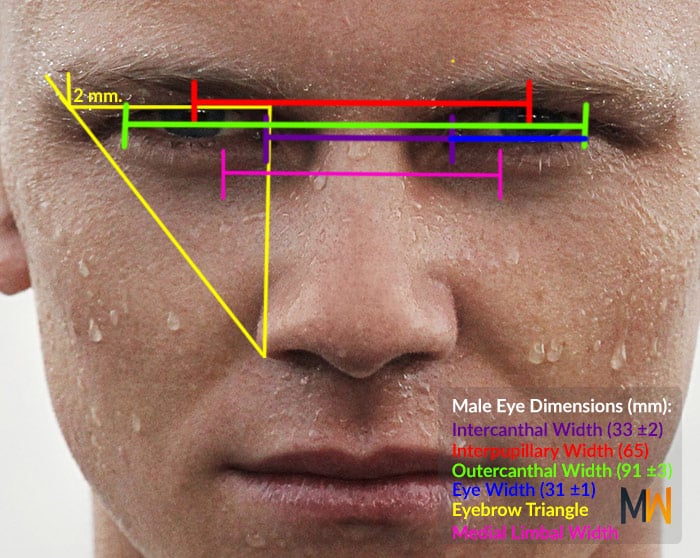 Another method for telling if the nose is too big is the nasal index. The nasal index is simply the ratio between nasal width and nasal length. The nasal index varies by ethnicity. Those whose ancestors evolved in dry and cold climates are more prone to having a narrow nose due to their nose heating more cold air. In the meantime, ethnicities from humid and hot places have wide noses to let as much air in as possible.

The formula for nasal index is: nasal width divided by nasal length then multiplied by 100. The chart below shows the different categories for the nasal index. 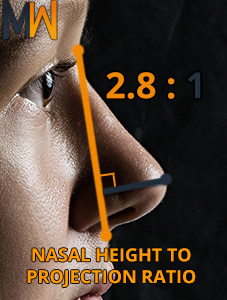 A few millimeters difference in the radix can make all the difference. A study that interviewed 106 people concluded that individuals would prefer a nose radix near the height of the pupil. In contrast, those with too high a radix are the most unappealing (Gomes et al. 2011). Statues like Greek gods often have the highest nose radix. 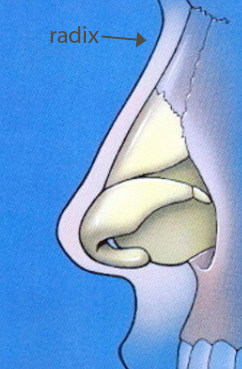 Although the nose comes in different shapes, its function remains the same. There are various genes responsible for the width and size of the nose. According to a study about human nose shape in correlation to genes, about four different phenotypes directly relate to the nasal structure (Cole et al. 2017).

Other genes affect the bone or cartilage, thus affecting the whole structure of the face. These genes are significant contributing factors for those born with small, medium, and large noses.

Each ethnicity globally has a standard nose shape: the Caucasians have a long narrow nose (leptorrhine), the Asians have a moderate size nose (mesorrhine). In contrast, the Africans have the broadest and most prominent nose (platyrrhine) shape among the three ethnicities.

Although this is not always the case, most people of African descent have wide nostrils, short nose bridges, and a round tip. Their nose structures are a combination of genetics and climate.

The sizes of the nostrils match the temperature and the absolute humidity of an area. This structure is due to people’s adaptation to their climates (Zaidi et al. 2017).

The central premise for this is that the air needs to be warm as it travels through the respiratory passageway. People living in colder regions of the world have a longer and narrower nose to ensure that the air is warmed as it enters the nose. Those living in more temperate regions do not need to warm the air and have a wide nose with a short bridge.

Techniques to Reduce the Size of Your Nose

There are many ways to change your nose’s size, the most effective, which gives permanent results, is rhinoplasty. A rhinoplasty is also called a nose job. A lot of celebrities and models undergo this procedure. Rhinoplasty is an invasive procedure where the surgeon will change the bone and cartilage of the nose to achieve a more desirable nasal structure.

If you’re hesitant in undergoing an invasive treatment, the best alternative for you is dermal fillers. This procedure entails injecting a gel-like material into the nose bridge. The surgeon will inject this material in a way to get the shape you want. The advantage of using dermal fillers is that it only takes approximately 20 minutes for the whole procedure; however, the effects will only last for six months.

Another technique that you can use is applying make-up to contour the sides of your nose. You can use a bronzer that is one shade darker than your nose, which gives your nose a shadow to make it look taller. Make-up artists always use contour to make a facial feature appear sharper. Contour is not just for the nose; it can also give the illusion of having a prominent jawline. 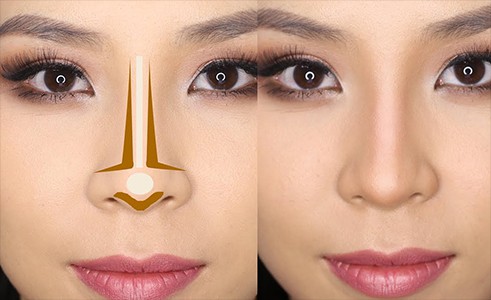 You can also adjust your overall styling, so the focus is not on your nose. A big no-no for people with a big nose is to have straight bangs. This hairstyle gives too much attention to your face and your nose. You can try layering your hair with highlights so that people will notice your hair more. A layered hairstyle is also best as it gives more depth to your face.

Check out our article that can help you in achieving a thin nose.

If you’re a selfie addict, you can try adjusting your angles so that your nose doesn’t seem too big in pictures. Try to look for the best angle for your face; if you think you don’t have one, you’re just not aware of it. All people have their most flattering and good angles. You can also use selfie sticks to ensure that the device is far from your face and gets a wider shot. You can read more about making your nose slimmer in selfies here.